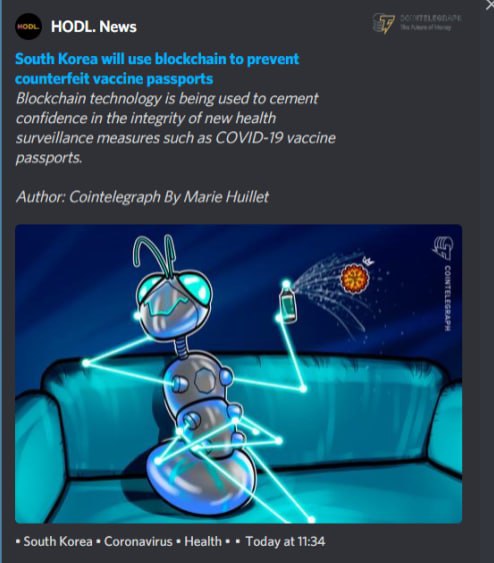 South Korean telco KT on Thursday said it will develop a COVID-19 vaccine passport for South Koreans who are travelling abroad.

The so-called digital health passport and related services are being developed in collaboration with Incheon International Airport and Inha University Hospital.

According to the telco, those wishing to travel abroad can visit designated hospitals for COVID-19 checkups. Negative tests from these checkups can then be uploaded to an app that issues the digital health passport for use at the airport, it said.

KT said it is planning for the app to also carry the electronic documents needed for entry into certain countries for added convenience.

The telco is also working towards having the digital health passport sync with different vaccine passports that are currently being developed by others. It will also work with other international airports to have the vaccine passport accepted, KT said.

Meanwhile, South Korea’s prime minister said on the same day that the government will launch an app later this month for verifying a person’s COVID-19 vaccination status.

The government app has been in development since the beginning of 2021 and will allow the people to feel “a sense of return to normalcy” after they are vaccinated, Prime Minister Chung Sye-kyun said at a press briefing.

Chung claimed that blockchain technology will be used in the system to prevent identity theft and protect privacy.

South Korea began its vaccination program in February, starting with health workers. At the same time, the country has seen a surge in cases in recent months, with 400 to 500 new cases daily.

The Prime Minister of South Korea has announced a blockchain-based vaccine certificate will launch later this month, but the concept has proven controversial across the world.

South Korea is joining a number of other nations in introducing vaccine certificates that enable cross-border travel while mitigating the risk of infections.

Prime Minister Chung Sye-kyun suggested there could be substantial benefits for citizens at home too:

“The introduction of a vaccine passport or ‘Green Pass’ will only allow those who have been vaccinated to experience the recovery to their daily lives,” he said during a daily inter-agency pandemic response meeting.

The government developed the app using blockchain technology as a way to provide security against the possibility of identity theft. “[Systems] in other countries also do not store personal information while allowing the verification of vaccination statuses,” Chung noted.

While 77,000 people have been vaccinated against COVID-19 in South Korea so far, the country saw another 551 daily cases on Wednesday. The Government hopes to have vaccinated 12 million people by June.

“Businesses and venues can scan and validate your pass to ensure you meet any COVID vaccination or testing requirements for entry.”

China has implemented a system and the European Union plans to do so by June. The International Air Transport Association is developing an app called Travel Pass, which may become the standard for cross border travel.

Crypto may also play a small role in thwarting efforts to impose non-blockchain based vaccination certificates. The BBC reports that cyber security agency CheckPoint found 1,200 ads for vaccines and vaccine passports on the darknet:

“Check Point investigators found many sellers offering forged documents, including one supposedly from the UK, with a vaccination card for $150 using the hard-to-trace cryptocurrency Bitcoin as the payment method.”